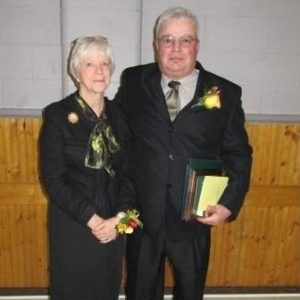 Norman Vaughan loves to farm.  He grew up on his parent’s dairy farm with his 2 brothers and 5 sisters.  They milked 22 cows and farmed 150 acres of land on their farm located on Canboro Rd in Wellandport.

Norman attended Pelham District High School.  He met Catharine Bailey in high school and they were married on July 2, 1971.   They built a house across the road when they were only 21 years old.  They still live in that house, almost 40 years later.  They raised 4 children, 2 daughters and 2 sons – Tricia, Douglas, Carolyn and Johnathon.

In 1977, Norm and Catharine bought the farm from Norm’s parents.  They milked cows and produced crops for 30 years. Even though Norm always had an off farm job he still managed to take care of the farm.  Norm drove truck making deliveries throughout Niagara for Simpson Sears, Esso, Egger and he now works for Christie’s dairy delivering dairy products to various stores throughout Hamilton.

When Norm wasn’t busy on the farm, or driving truck he was busy volunteering for several organizations.  He has been an elder at the Elcho United Church for 38 years.  He joined the board of the Niagara North Federation of Agriculture in 1990.  He held the position of President for 7 years.  While president for the federation he helped organize several events including the rural routes farm tours. He also helped in the development of 4 children’s agriculture videos.  He was part of the Regional ag sub committee and the tree bylaw committee.  He helped organize annual meetings inviting speakers such as Eugene Wheland and Dr. Tim Ball.  He was instrumental in filling four buses for the big Ottawa rally in 19  .  Norm also delivered generators and supplies to the victims of the major ice storm out east.

Norm has always been active as a leader for the 4-H plowing club.  At one time he has had as many as 18 members in the club.  It was always challenging finding enough tractors for everyone to practice on. This year he has only 8 members and 6 leaders.  This allows everyone a chance to learn about equipment safety and the proper way to plough a field.

Norm is a long time member of the Niagara North Plowmens Assoc.  He has held the position of president for several terms.  They are responsible for organizing the local ploughing match every year.

The Vaughans have always been concerned about conservation and erosion control. Over the past several years they have worked with the Niagara Peninsula Conservation Authority and the Ministry of Natural Resources, Land Care Niagara planting a variety of hardwood and softwood trees.  They have planted trees on 16.5 acres, 15,000 trees.

When Norm is not working on his 400 acres of cash crops he is bowling with the Gainsborough bowling league causing grief for all those around him or he is vacationing with his wife and friends in the sunny south.  Norm has also participated in several marathons including Round the Bay, McNally House Walk and the St.  Joseph’s Kidney Foundation walk.  And when he is not doing any of those, he can be found playing with his 4 grandchildren teaching them all about farming and having fun!

There are no upcoming events at this time.