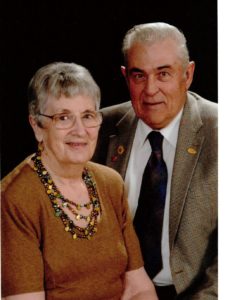 Ken Durham is a 5th generation retired farmer living in Smithville. To be a fifth generation farmer means that 4 generations before you lived on the same farm.  In 1879 Elijah Durham, his wife Annie and Elijah’s mother Emma the wife of the late Joseph Durham purchased the farm on Thirty Rd in Smithville.  Elijah with his wife Annie had four children. One of their sons Elmer farmed in partnership with Elijah. Elmer and Mable had one son, Roy.  Roy worked the farm with his dad. Roy married Eva and had two children, Ken and Elizabeth.  And so Ken’s story begins.

Ken has been a part of the agriculture and local community his whole life. Ken enjoyed 4-H and working on the farm. After 4-H Ken joined the local junior farmers.  He was part of the Junior Farmers United Nations tour in 1957. Ken graduated from the University of Guelph in 1959. He won a scholarship for Harper Adams Agriculture College in Britain.  He completed his thesis on feeding dairy cattle and received his HAAC with Honours. He met his wife Susan in Britain.  Ken returned to the family farm in the fall of 1960. Susan graduated from the National Institute of Poultry and then came to Canada in 1961. Ken and Susan were married in 1962 and had three children – Richard, Louise and Emma. Their next generation includes 1 grandchild, 6 step grandchildren and 4 step great grandchildren. Ken and Susan made several changes to the dairy operation over the years.  Susan took care of the cows and the farm books while Ken took care of the field work and worked off the farm. Ken has often said that without Susan’s help he would not have been able to continue farming. Ken developed his own brand of calf starter, Spring Ridge Calf Starter and began manufacturing feed and concentrates. Ken also fixed small engines on the farm. They started minimum tillage and are now practicing zero tillage. In 1985 they had a fire, which destroyed the dairy barn and all but six cows and some young stock. Ken and Susan rebuilt a new modern dairy barn, naturally ventilated with a two story section for hay storage. They milked cows until 2010. They have expanded their operation to include several other farms. Richard, the sixth generation has taken over the farming operation.

When Ken wasn’t farming he was attending agriculture and environmental meetings. He has been a director of the Niagara North Federation of Agriculture since 1968. He was a director for the Ontario Federation of Agriculture and was on the OFA’s Agriculture Environment Committee.  He was a 4-H leader for ten years teaching the field crops unit and was involved with the Niagara North Plowmen’s Association. Ken has sat as an advisor on many committees including the Niagara Tree Bylaw Committee, the Niagara River  Advisory Committee, the Chemical Waste Management Committee and the Ontario Biosolids Utilization Committee just to name a few.  Ken was one of four farmers on the Farm Pollutions Advisory Committee. For 11 years he sat on the committee reviewing complaints and making recommendations. In 1985 Ken worked with Ian Brindle, head of the chemistry department at Brock, in exposing the leaking of PCB’s in Smithville.

In his spare time Ken enjoys flying and photography. In 2011 Ken’s children gave him the gift of a lifetime, a flight on the Lancaster.  Ken also enjoys decreasing the coyote population which has been increasing over the years. Ken has been the organist for St. Luke’s Anglican Church since 1954. He received the Order of Niagara from the Diocese of Niagara in 2013 and has received several volunteer awards because of his dedication to the agriculture industry and the community.

Ken and Susan also enjoy travelling and visiting their children and grandchildren. Their daughter Louise lives in England and Emma lives in Virginia. Ken’s sister Elizabeth lives in Clairmont, north of Oshawa.

Some say that Ken has gone to the dogs. Since he was a young boy Ken has always had a dog. He enjoys training then and bringing them to meetings and social functions. His newest friend is Avery. Some of his tricks include bringing in the paper and counting. They are known as the Ken and Avery travelling road show.

There are no upcoming events at this time.